You must complete Sutekh's Stolen Gems Quest before you can start this quest. Completing this quest will grant you access to Dragon Land. I have not killed Mukarrama so I'm not sure what happens after you kill him.

Note: Completing this quest will allow you access to Dragon Land AND be able to kill dragons with out having to do the Wurms Quest, however, you will still need to complete the 1000 Sand Wurms Quest to go down to the Blue Level. 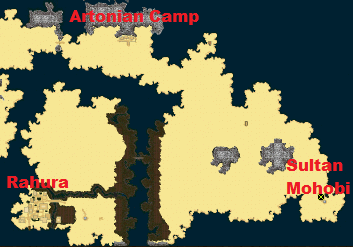 Retrieved from "https://ashenempires.fandom.com/wiki/Artonian_Quest?oldid=5216"
Community content is available under CC-BY-SA unless otherwise noted.